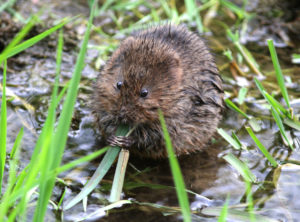 What Water Voles are, where and how they live and what has led to their current status as one of Britain’s fastest declining mammals. Following our talks on Namibia, Alaska and Norfolk we come close to home for our next meeting on February 12th given by local painter, writer, photographer and naturalist Christine Gregory. The water vole has the unenviable status of being Britain’s fastest declining species with populations having dropped by 80% in the 1990’s. Christine will give the reasons for this decline and describe the efforts being made by conservationists, fishing clubs, volunteers and land managers to save remaining water vole colonies across the country. She will call on decades of research into water vole decline as well as her own fieldwork and photographic documentation of the water courses of Derbyshire.