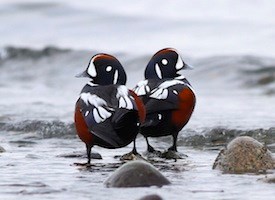 Bakewell Bird Study Group kicks off its new season on September 12th at 7.30 with a talk entitled ‘Iceland – Land of Fire, Ice and Waterfalls’ by Ian Newton. Iceland is famous for its active geology, cascading waterfalls, laver fields and snow capped volcanoes. Its wildlife includes rare breeding birds such as the harlequin duck which loves fast flowing rivers and surf, normally found in North America, plus some of the best whale watching in Europe. Iceland has become a popular destination in recent years so to see why come along and hear Ian’s talk.