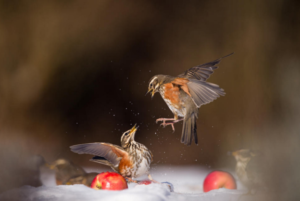 A SURPRISE PACKAGE presented by local wildlife photographer Andrew Parkinson.  Andy lives in Crich and moved up from the south to concentrate on wildlife photography. His work has been lauded by Chris Packham and he has been named the 2016 Bird Photographer of the Year.  He is quoted as saying  “There is a lot of what I’d call homogeneity with wildlife photography now, I like to produce unique and credible bodies of work”. The picture of two redwings fighting over an apple is a good example. Mountain hares are his favourite animal to photograph and he has made a study of this animal in the Peak District as well as the Highlands of Scotland.

A short AGM will be held after Andy’s presentation.