Last month we posted about our new nest boxes for Swifts in the Bakewell Church Tower. 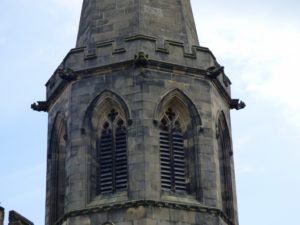 Swifts returned to Bakewell dead on schedule, May 9th, and we almost managed to get our swift boxes ready in time, just a couple of days late. Mike was recovering from his holiday in Germany so this time it was the aforesaid John Boyle, myself and my friend Jack from Sheffield who climbed the stairs and ladder into the belfry. Angela was in Cyprus sunning herself so – no coffee.

While John finished converting the circular holes in the shutters into slots of the designated width (22mm) Jack and I assembled the electrical equipment which makes the swift noises. This consists of a 12v amplifier of the type used on motor cycles, a 240v/12v power adaptor and a pair of speakers or “tweeters”. The amplifier is fitted with an SD card slot, the type you put in your camera, whereas our swift calls had been recorded onto a CD given to us at Tanya Hoare’s swift talk by Andrew and Barbara Wager of Thorpe and I’m very grateful for their help. I cajoled a friend who has a computer with both a disc drive and an SD card slot to transfer the swift calls onto the card then I set it all up in my living room beforehand – and it worked! And all for under £50. 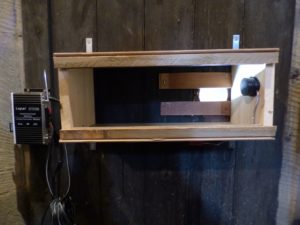 We sited the amplifier adjacent to one of the boxes on the N window and fixed one of the speakers inside (photo). We threaded the speaker cable through the bottom of the box and secured them to the terminals at the back of the amp. Needless to say this is a rather simplified account of what actually happened, in actuality more time was spent discussing methodology, looking for lost screws and avoiding accidents. Then there were the ear piercing bongs every quarter of an hour although it seemed like every 5 minutes: time definitely goes faster in a bell tower (cf Einstein). The second speaker was fitted inside another box on the NW window. All that was needed now was to set the times on the plug socket timer when the calls would play, we chose 7 to 8am and 8 to 9pm.
As we descended into the sunlight swifts were circling the bell tower and we dared to think that they might use the boxes this year….So if you are in Bakewell on a summer evening stroll up to the church and listen to the swifts.