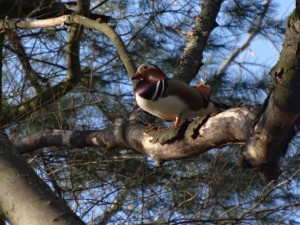 It’s been an exciting year in my bit of woodland on Froggatt Edge despite a slow start as a result of the late spring. Usually a pair of tawny owls would have taken up one of the owl boxes by mid March but this year a pair of mandarin ducks took over.  A non birding neighbour who lives next to the wood called me at the end of April to say there was a colourful duck sitting in a tree by the box. I immediately rushed up with the camera and got close enough to get a reasonable photo. The same neighbour, at the end of May, said he hadn’t seen any activity for a while so I climbed up and stuck the camera in the box, one handed, and clicked. The result was a perfect picture of the female sitting on her eggs. It transpired there were 10 of them. Later in June I cleared the box and found lots of egg shells and two infertile eggs.  The wood is a kilometre from the river Derwent, across a main road, so I wondered how the ducklings had fared. No worries it would seem: I spotted the duck and eight ducklings on the river a couple of weeks later, of course I could be adding two and two and getting eight but I like to think they were mine.. 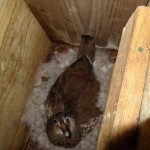 It was a reasonable year for pied flycatchers, one pair in the wood fledged 7 young and four pairs in total from boxes which I look after. Spotted flycatchers nested for the first time, only 10 meters from the pied flycatchers, but unfortunately the young were predated by a jay. The last great tit fledged on July 16th, a very late date.

Perhaps the most unusual occurrence was an immature crossbill which spent a few days at the end of June hanging off the bird feeder right in front the shed. Very tame it was too: here it is sharing the feeder with a siskin. 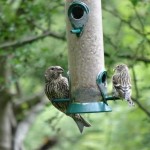 Right now the swallows are congregating on the wires outside my house, many of them young birds which is encouraging: the warm summer seems to have paid dividends. 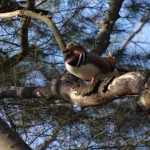