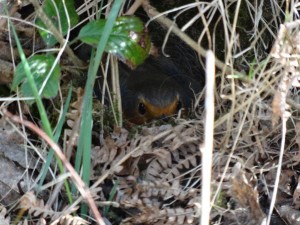 Things have got off to a flying start in the wood this spring. A mistle thrush has been sitting on a nest for nearly two weeks in a fork in a sycamore tree that I had hacked about during the winter in an attempt to kill it with a view to providing dead wood for a woodpecker. Obviously the thrush hasn’t read my master plan. And a robin has rather perversely built a nest on the ground only a few feet from a footpath which the highland cattle churn up with their big feet while what would appear to be a much safer option, namely an open fronted box on an ivy covered tree just a few meters away has been spurned. Robins always seem to nest on the ground round here – and there are plenty of robins so they must know what they’re doing.  Not more than 20 meters away a long tailed tit has nested in the same gorse bush as last year when it fell victim to the snow. No such problems this year (hopefully). 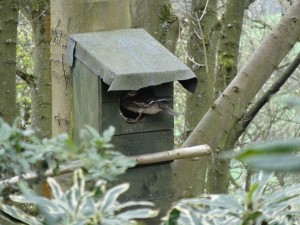 The big story however is the ‘owl’ box. Last year a pair of mandarin ducks raised eight ducklings in it. This year they returned but a quick pic on April 3rd showed that things weren’t quite as simple as we imagined: three tawny owl eggs and two mandarin duck eggs. We assumed the owl had laid first and the ducks had taken over. A few days ago (10th) however the owl was seen leaving the box and two days later the ducks were loitering with intent (photo). What’s going on! If only I’d bought that camera I saw at the Carsington Water bird shop I’d know. What a great saga it could be for Spring Watch. Anyway I’ll keep you posted.  Oh yes, and the first pied flycatcher returned on April 11th, the earliest I can remember.