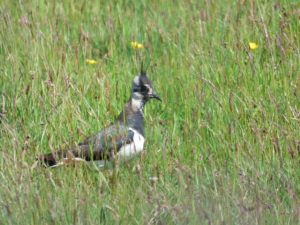 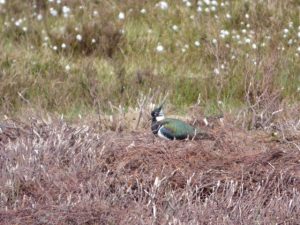 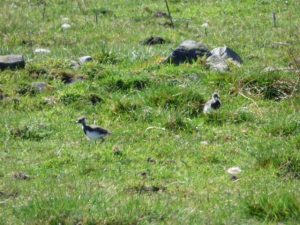 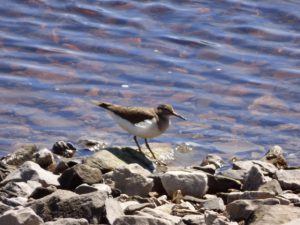 The weather was perfect as we left the car and a song thrush and blackcap were in full song. We soon spotted a pair of common sandpipers along the water’s edge, Redmires is one of the few places they breed in the Peak District. A pair of grey wagtails was feeding young in a nest by the dam wall and we could admire the brilliant yellow of the male and the black throat. We turned the corner alongside the conduit and were immediately greeted by the calls of lapwings and curlews. The lapwings had chicks but they were difficult to spot in the long grass. An obliging red grouse gave us some good views on the heavily managed grouse moor. We had a fleeting glimpse of a snipe and a slightly longer look at a golden plover flying over but not the views we had hoped for, they are more conspicuous later when they have chicks on the ground. By this time the wind had got up and it was distinctly cool. Those who had seen the weather forecast were unprepared so we took the shortest way back to the car park. Four of us soldiered on along Long Causeway and were rewarded by some warm sunshine and marvellous views of a cuckoo atop a dead tree in the felled area used by nightjars later in the summer. Tree pipits like this type of terrain so we had fun trying to convince ourselves that we could distinguish between them and the meadow pipits we had seen earlier.

All in all a very enjoyable trip and I’d like to repeat it next year maybe a week or two later when the golden plover have chicks and the lapwing chicks are bigger. In the absence of Chris I thought I’d better go back and take some photos and picked up linnet, reed bunting and pied wagtail, so a good day.