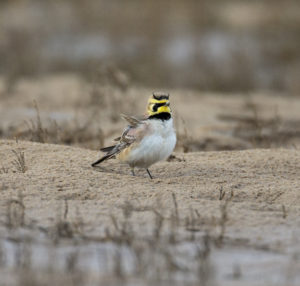 Graham has lived in Lincolnshire for the vast majority of his life and has been an avid birdwatcher for almost 50 years and has thus seen major changes in bird populations.  He was bird recorder for Lincolnshire for 10 years and is a member of the British Birds Rarities Committee .  His photographic work has been published in a wide variety of bird magazines and books. The talk discusses the changes that have taken place in Lincolnshire over his lifetime and also how birds themselves have changed in occurrence patterns and numerically. The lecture is illustrated with many of Graham’s photographs and features some well known Lincolnshire rarities as well as birds from his local patch at Barton where he still spends most of his hours. The bird shown is a Shore Lark taken on the beach at Cleethorpes.