It’s been a difficult breeding season in the wood this year especially for blue tits and great tits probably because of the cold spell at the end of April and early May. Lots of desertions and low fledging rates have meant far fewer fledglings than usual. Only 105 blue tits fledged compared with 273 last year and over 200 every year previously for the last 6 years. Fledging rate was only 44% compared with around 70% normally. Unlike 2102 when we also had a cold snap and there were lots second broods this year there was only one with two fledglings still in the nest on July 1st.

Great tits did no better: only 30 fledglings compared with 105 last year which was amazingly good, the usual is around 70. Fledging rate was even lower than the blue tits: only 38% compared with 94% last year.

Pied flycatchers fared better with 7 nests compared with an average of 4 the last few years. They started breeding a week later than usual so missed the cold spell. Nevertheless fledging rate was lower than usual, 68% compared with 90% normally (only 70% last year) probably as a result of scarcity of food. Certainly the shredding of the silver birches by caterpillars has been markedly absent this year. Still, 32 fledglings isn’t a bad result and each one was ringed so it’ll be interesting to see if they come back next year. 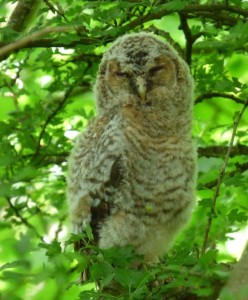 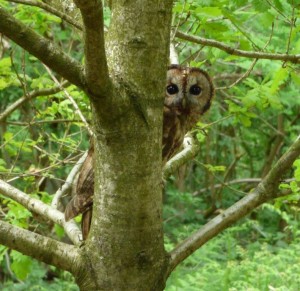 The highlight of the spring was the tawny owls which again outwitted the mandarin ducks for dominance of the favourite box. Two chicks fledged, one nearly a week before the other such was the difference in size. The big one let me take a picture and I also managed to get a picture of mum as I surprised her when she was dozing. For once I had camera at hand and managed to snap her just before she took off.