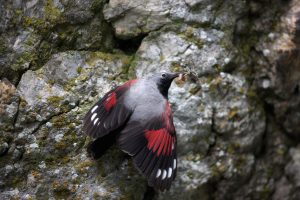 Imagine a countryside where birds were as common as they used to be here in the 1950’s. Hedgerows full of thrushes, yellowhammers and linnets, fields resounding with the calls of lapwings and skylarks. Eastern Europe still has an incredible number and variety of birds mainly as a result of less intensive agriculture. Bird watching is also more accessible because access to the land is less restrictive. Bulgaria, Romania, Hungary and Poland all feature in this talk by Mike Lane for the Bakewell Bird Study Group on Monday October 11th at 7.30pm. White-tailed eagles, golden eagles and European jackals can be found as well as the highly colourful but elusive wallcreeper shown in the photograph. This spectacular bird found on cliff faces in mountain regions mainly in Eastern Europe is highly prized as a ‘tick’ for birders.